Fire Emblem is the seventh game in the series to be made, but the first released in English on American shores. You might also see it referred to as Fire Emblem: Blazing Sword or something like that. It is a very popular series in Japan, and for good reason. The developer, Intelligent Systems, are the people who brought us a the Advance Wars series (which started out strong). They also made the successful and incessantly copied puzzle game Tetris Attack/Pokemon Puzzle Challenge/Planet Puzzle League (same mechanic each).

Fire Emblem gives you a large and diverse cast. Additionally, unlike most SRPGs you can take a good many of them into battle at once. Up to around 14 in your party. So battles are long strategic affairs. You move your crew slowly and cautiously over large spaces populated both densely and sparsely.

The game is a deep, detailed and large game, do not be fooled by its presence on the GBA. There is much more to be said and experienced about it than I will mention below. However I will cover points important from my unique perspective, and with some small bits of humor.

The battle layout of Fire Emblem is more or less a top down upon a 2D playing field. The environment art provides the illusion of slight 3D. Gameplay is measured out on a square grid and almost all attack ranges are within two squares. You can move all members of your team in any order during your turn. 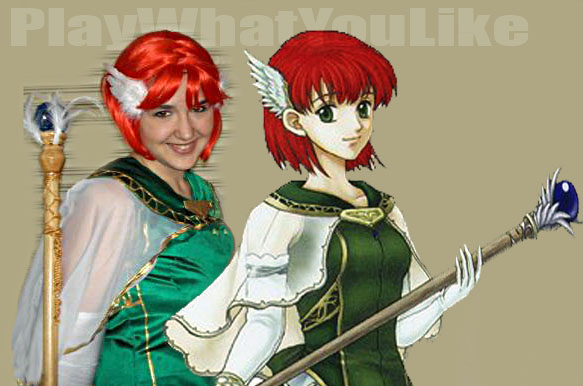 Too Big for a Bullet Point:  Story & Storytelling

How did they fit so much story content into such a small cartridge? Additionally, just having a lot of story is not enough. It has to be delivered in an understandable and entertaining way. Fire Emblem did not lack on this front and even included welcome side quests.

It is a sweeping epic with optional prologue stories depending on the hero character with whom you choose to start. You will find yourself quickly investing in the trials of these people. You will likely resonate with at least two of the three heroes, and at least half the supporting cast. That is not a bad score.

One of my favorite things was the chapter transitions. Beating the final battle in a chapter opens a world map and starts sweeping music. The arrow moves across the screen while text fills you in on what is happening. The music, simple but fitting camera work and brevity of these interludes enhanced the playing experience. Little touches of quality like this make a difference.

Too Big for a Bullet Point:  Auto-Retaliation

Like some SRPGs, Fire Emblem employs an automatic counter attack. If you attack them and they survive, they will attack you back (if possible). It is more important in Fire Emblem than other SRPGs. Here your hit point count is low and it only takes one encounter gone bad to send a character permanently to the graveyard.

Every move both offensive and defensive has to be made with this in mind. If you have a knight for example guarding a pass and he is attacked by a weaker opponent, he can counter and destroy him. However that makes room for another weaker opponent to attack and get destroyed. This can lead to a deadly conga-line of doom for your knight who can eventually succumb to an outrageous number of attacks in one round.

Such multiple attacks may also wreak havoc in regards to the finite uses of your warrior’s weapons. You may not have planned on 5 uses in one turn of a rare and perhaps irreplaceable weapon. While auto-retaliation adds plenty of strategic thought, it does come with a price of occasional frustration and added time in restarts. 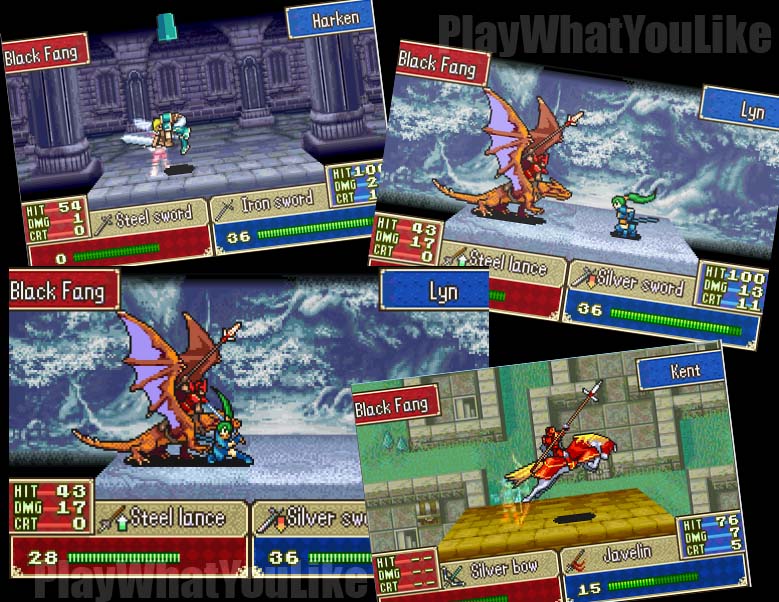 Too Big for a Bullet Point:  Hard Times

Fire Emblem is hard. It is not for the casual gamer, and may not be for the casual SRPG player. It is not the best entry-level SRPG like Advance Wars or Final Fantasy Tactics Advance. However many of you reading this are fans of the genre and would relish the challenge. Fire Emblem certainly provides it.

I played on “hard” which in retrospect was probably a mistake. I do not like to lose characters, nor restart levels (unless the AI pulls a cheese). So this forced a rather overly cautious and somewhat tedious style of play. Even the regular difficulty would still be hampered by occasional cheaply appearing enemy units and strangely potent enemy power surprises.

If you allow real character death like Fire Emblem did, all the more care is necessary when adjusting difficulty level. Players should win or lose on strategic decisions, not high powered surprises that force restarts. Nor enemy reinforcements suddenly appearing and attacking your back without your having a chance to to anything but watch.

Too Big for a Bullet Point: Double-Triple Danger

With real permanent death around every corner, designers needed to be extra careful about the X-factors and variables. Depending on the level difference, sometimes characters could attack twice in one turn. Some weapons allowed for two attacks in one turn. These factors combined sometimes allowed characters to attack four times in one turn! Who can calculate for that? (-and enjoy it.)

Then there was “confusion”. In some games this special attack is fun. However Fire Emblem was a system where one hit could permanently kill a character. So some designer thought that an enemy using confusion from a great distance would be fun. It was not fun to watch one of your high-powered heroes cut down a supporting allied character with a single stroke. It was cheap.

Too Big for a Bullet Point: Fullness Through FAQs

There is a big cast in Fire Emblem. Many of whom you will encounter no matter what. However some require specific actions not easily discerned without a FAQ. I do not like reliance on FAQs. A game should intuitively lead you to encounters and leave you with a choice whether to pursue or not.

For example Harken was a dashing and fun character. However he would only offer to join your party if you killed three or less sages on a particular level. Huh? How are we supposed to know that? In a game where you usually win each level by killing all enemies, this is really unlikely to be stumbled upon without a FAQ. It was not like whether or not you decided to help an old lady… THAT would make sense.

Some games make you look back on the time spent with regret (*cough, Ogre Battle 64*). FE7 is not one of those. Even the rather ridiculous amount of hours playing in this case shine.

FE7 is one of those rare games where everything came together well and gelled.  Every department from design, to art to music to story pulled in the same direction. Would that it was more common, but it is not. FE8 will have a hard time matching this experience. You WILL feel like you went places and made a difference.

The writing transmitted realistic reactions from characters. The makers were wise enough to know when a light throwaway line was called for and when the player may really be moved. Getting player investment into game characters is a laudable goal. If you were not saddened by the fall of your good female spy, perhaps you were playing a different game.

The real and permanent death made my style of play where “everyone goes home” difficult. You try playing without restarts and see how you do.

By whatever means you can, warp yourself into this 2003 game. If you have any love for this genre, and are looking for a quality experience, you will not regret it.