Jeanne d’Arc was on our favorable radar for years before playing. Early screenshots showed a rich textured environment standing out among its contemporaries. Developer Level 5 had only produced a small number of games up to that point, but afterward showed itself to be a prolific and successful game developer. The company even contracted Yasumi Matsuno, the father of modern SRPGs, for a game project.

Of note, our chief architect is personally familiar with two executives associated with this production, Allen Becker and Shushei Yoshida. In addition, a games industry co-worker gave us a detailed, written debrief on this game that yielded numerous insights from a different perspective. Also, an observer joined us for much of our play-through. It’ll all be wrapped into our classic Play What You Like analysis package.

The start screen (top) is indicative of the kind of quality this game offers. Jeanne employs a 3D environment, populated by 3D fighting units. Many conversations are handled with large 2D portraits in the style of Fire Emblem. The environment can be rotated.

Our games industry coworker, whom we will call R, played Jeanne and wrote up a fine debrief for us. He’s a very analytical, mechanics oriented player. It’s different from our intuitive, improvisational mindset. When we finally finished Jeanne and read his debrief, we were amazed at the different foci.

To him, burning aura was a major, game-changing mechanic. He meticulously strategized how to get the most out of every aura by planning an entire series of strikes. The overall game balance was strong enough to hold up to this rigorous use. 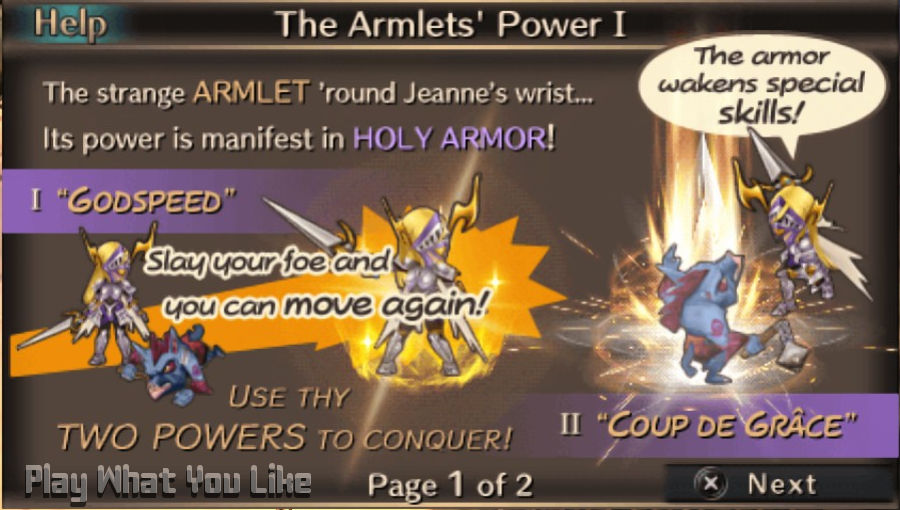 This was the second mechanic coworker R used to the extreme. He tailored his entire battle strategy around the armlet wielders and their special abilities. We played Jeanne more like a traditional Final Fantasy Tactics style SRPG. For him, Godspeed was a planned go-to. For us, it was an emergency maneuver. It’s an interesting example of differing play styles. Good games can make room for such differences. 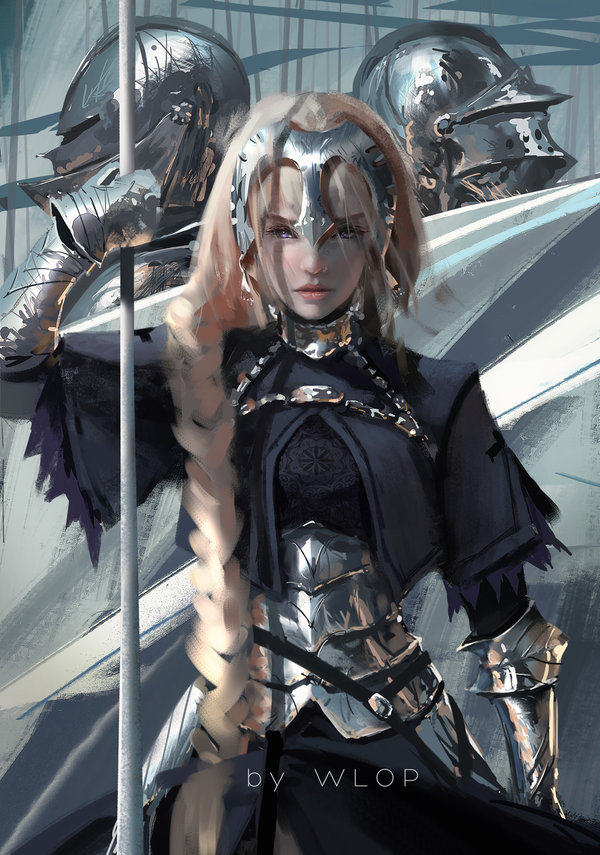 Too Big For a Bullet Point: The Armtlets,  Jeanne d’Arc’s Signature Shtick

Five or six units can wear them, including a bad guy, a guy who goes bad, and a… frog? Yes, a frog. Okay, the frog idea is dumb (we’d play a moogle from Final Fantasy Tactics Advance before a frog), but the armlets themselves have potential.

Armlets can (allegedly) hold up to four or five gems. Each allows one transformation in battle if enough rounds pass. Transforming unlocks heightened abilities including Godspeed. Maybe one reason we don’t embrace armlets like coworker R is that we didn’t go to a FAQ to find out where all the gems were. Our armlet users had only one or two. But trying to use three or more starts butting you up against the unfun, arbitrary turn limits (mentioned below).

The armlets are a fine idea with imperfect implementation. They should wow us, but don’t.

How about being able to put an armlet an YOUR favorite characters instead of pre-selected ones? Allow most gems to be found in the course of the story, leaving only a few for FAQ users and ultra-completionists. Tone down armlet transformation superpowers and allow it to happen more often without throwing off game balance.

Why not ONLY show items that can be crafted to the one selected? Oh the endless scrolling!

According to FAQs, Lion-O has worse stats than the utterly uninteresting Rufus, the dog sidekick character. Ugh. Why? Lion-O is all over this game’s story. It’s natural most players will gravitate toward him.

We chose the whip girl path over the one with the magic lady, not that you would know this without a FAQ. Unfortunately the whip girl was “pretty cruddy,” if I may paraphrase coworker R. We liked her anyway and insisted on using her if only for her stun attack (and attitude). It weakened our team though, and soaked up experience better dedicated to more formidable characters. XP they needed for the end battles.

We think the rogue could have had a useful assassination/knock-out attack if he was able to get to an enemy’s back with exactly one move unit left. Coworker R agreed these classes were weak. He suggested some fun mods to the whip user that remind us of good stuff in Rondo of Swords before it was even released.

Coworker R made good points on this topic. He took into account “affinities” (see “Bad”) and swapped spells based on the enemy preview before level start. It made magic too powerful in his eyes. We think changing a character’s signature magic dilutes personality, turning your crew into mere “video game units.”

Of course he too noticed that magic wasn’t just for magic characters. And although anybody could use it, the armlet wielders, already powerful, were very good with it. Magic for everybody systems downplay specialization. We and coworker R are on the same page there. Perhaps you too. Characters become too interchangeable. Anybody can be your healer, etc. 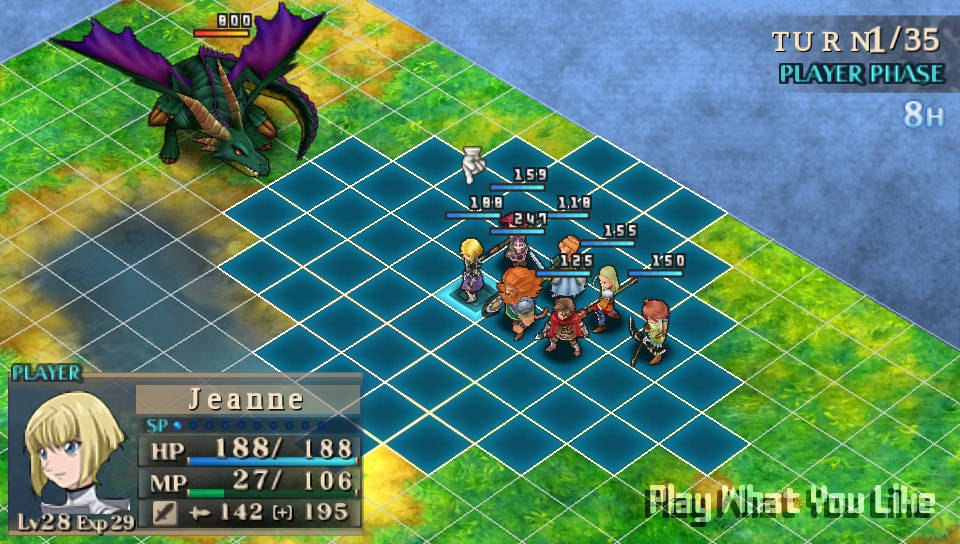 Too Big For a Bullet Point: The Ending—Too Little, Too Late

Yes, the ending is happy, although one must trudge miles of downerism to get to it. Not that story arcs need to always end happily, but doling out little victories along the way to keep up interest and morale is smart game-making, novel writing, and story telling. (Just ask our chief architect.)

The ending also feels… unfitting. It isn’t too happy for most games, but is for this one whose dark narrative offers little to make you smile. The game, virtually devoid of romance, suddenly has it play a role in the ending. Another character, hardly fleshed out, steps in unexpectedly to do a noble deed.

The game had plenty of chances to fill us in about him earlier, and seed this possibility. It doesn’t. So the ending leaves us weirdly flat. Still, it’s much better than a straight downer (like possible endings in Tactics Ogre: Let Us Cling Together or Ogre Battle 64). And preferable to the possible tepid ending of Rivera.

However this was a mechanic that coworker R enjoyed and of which he took great advantage. He thoughtfully surveyed the field ahead of each battle, loading up counter units with counter affinities and spells. If one is willing to do all that plus squeeze affinity boosters into limited skill slots and swap out different magics for battles as needed, more power to ya. It’s not for us, but does power up units and worked for him.

Coworker R found it a pain going to location after location trying to find the couple shops that sold a particular item. It was indeed a big world map. The game didn’t instill in us a desire to search that hard.

It’s one element too many, and tailored exclusively for bruiser style play, a style for which we were under prepared. Make it hard. Fine. But design a boss that can be defeated in more than one way. Think about the differing styles possible in your game.

Defeating a finite amount of visible enemies is more satisfying than a constant stream of respawning bruisers that “just appear.

Remember when cut scenes were treats? Games like Final Fantasy VII. Yeah, good times… It’s an element forgotten in Jeanne, aside from the few animated offerings.

Too Big For a Bullet Point: Overall Story—Land of Wieners

Yes, the ending is upbeat but the game content isn’t. You’re trying to defend a country of backstabbers, jerks, and effete snobs against an invading army of noble brutes, weasels, and demons. There’s hardly a likeable chap in the cast. And don’t think your crew of war-weary, emotionally unstable misfits are much better. (Because they aren’t.)

Unhinged Jeanne actually manages to be a less likeable hero than what’s-his-name from Final Fantasy Tactics Advance. You know, the one famously (and accurately) dubbed by a youtuber as the guy who “just wants to ruin everybody’s fun.”

In Jeanne forces dumb, pointless battles. We just didn’t care about the supposed goals laid before us. Little info is given, little incentive develops. It just drones on after the initial introductory burst. We didn’t care about either side of losers, nor many of the main crew. Fire Emblem: Radiant Dawn also swirls down in this category (and the “Political Missteps” one above). It’s a shame. Serious games can do better. Look at Vandal Hearts.

The game drags you down with story elements that include burning an innocent character to death at a stake. Fun! (A character we initially liked before she went beyond Jeanne’s “unhinged” to “door completely off.”) And it’s done in such a way that you think she might be rescued. (She isn’t.) Additionally, the main character disappears for a series of levels mid-game. Are these bold choices? Yes. Do they promote fun? No.

Both our official game observer and coworker R weren’t pleased with the supposed killing off of the main character. These two people have very different personalities and yet came to the same conclusion as us.

Too Big For a Bullet Point: Too Little, Too Late, Too Hard

(Yes, the blue heading is right. This point is Good and Bad, but belongs here for clarity.) FAQ reliance is something we don’t care for, as regulars to Play What You Like know. Jeanne’s replacement, soon thereafter taken from you too, can be brought back, sort of, after the game is beaten. It isn’t easy, and unlikely to occur without FAQ information. (We don’t think the smallest hint in the ending movie is enough.)

Even with directions our observer obtained, the task is too hard (at least for us, for we were done with the game and had little desire to keep grinding.) So we watched the “resolution” online. We agreed with our observer that it isn’t enough to salve the uneasy way things were left. But it was, at least, better than leaving it in a worse place. It was better than nothing.

Make this important denouement happen earlier, or point to it more directly in the end movie so people are inspired to resolve things (and play longer). And for goodness sake, it doesn’t have to be that tedious to obtain!

Jeanne D’Arc was quite a game, and quite an experience. We went in with raised expectations, and although we got a good game, too many elements left us flat to call it a great game. No single, glaring flaw drags down this quality SRPG. Rather the constant pinprick of little missteps takes a long term toll.

Would we recommend Jeanne to SRPG fans? Yes, certainly. It has a richness not often seen, and the ambiance it offers early on is worth some hours of play. You may find yourself aligned with coworker R, finding a fun challenge in the manipulation of gameplay systems minutiae. It might be enough to mitigate flaws that dragged down the experience for us.

This game had great potential, and incorporated fine elements. It played it safe, yet also went way out there. It certainly gets props for pioneering some fun mechanics. Jeanne’s problems run the gamut from facts hard to dispute to matters of taste. Hopefully, after this in-depth analysis, you’ll know where you stand.

Special thanks to our observer for spending quite some time watching this play-through. And thanks to coworker R, who wrote up the detailed debrief of his gaming experience years ago. We are appreciative.