Shining Force III Scenario Two: Target—Child of God is sequel to a classic SRPG that ended up on the wrong side of history. As mentioned in the first game’s analysis, the three that comprise this series came out at the end of the Saturn era, and never got the attention they deserved. Only Shining Force III Scenario One was released in North America. So playing this second scenario might be a challenge. It was for us. It has taken us years to finally get the right combination of hardware, software, and completed translation of the game. (The latter thanks to the Shining Force Translation Project.)

After our very positive experience with Scenario One, we were looking forward to this game at long last. Our expectations were understandably high. The game accomplishes something still unique to this day: It depicts the same epic story told through three different games, from three different perspectives. Many of the story elements happen simultaneously.

The game again sets the tone with a dramatic opening movie. It continues the same level of polish, solid interface, and technical expertise as its predecessor. The layout is 3D geometry in a rotatable 3D world. The characters are 2D sprites on map and 3D in battle cutscenes. 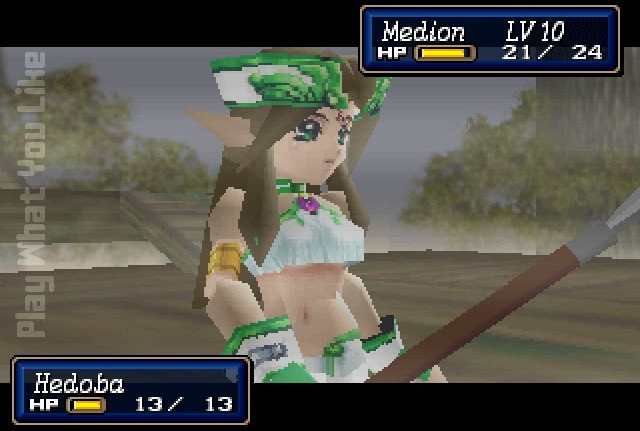 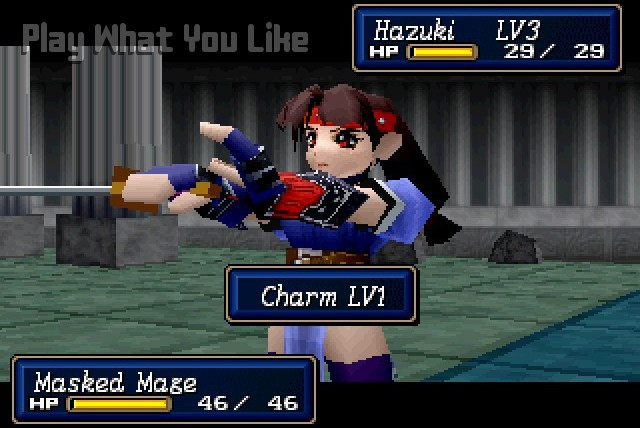 When an attack is blocked, dodged, or even significantly reduced because of the friendship level of a nearby comrade, something special should happen. The friendship icon should pulse, and perhaps a special sound. Underscore the significance of the system. 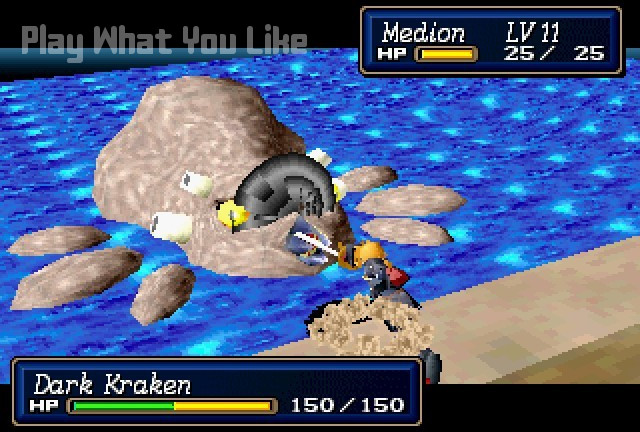 [You don’t see big, regular RPG styled bosses too much in SRPGs. It was fun in Vandal Hearts II, and a nice change up here.]

Too Big for a Bullet Point:  Player-Altered Battlefield

Being able to interact and affect the environment is good! It’s one of the great things about Kartia. SRPGs need more of it. Freeze water to cross over? Great idea. Too bad it wasn’t seeded, taught, or even demonstrated. When are we supposed to grasp this? In the middle of a contrived, time-sensitive battle that eventually pits you against the fearsome red cloaked figures from the opening movie?

They’re waaay out of your league, even dispatching bosses you’ve been struggling against without breaking a sweat. We realized we could freeze the water only after wandering around trying everything to escape in desperate trial and error. By then it was too late for everyone to get away. It turned into a clusterbomb disaster and we lost units. Of course, we could have restarted with our newly gained knowledge, but that isn’t Play What You Like’s style. And what would the challenge be then? Fighting boredom?

Good ideas like this one need the entire design team’s support. It should be somehow demonstrated earlier in a non life-threatening situation. And then it should be used in a few fun situations. It isn’t. A valuable environmental interaction tool wasted. 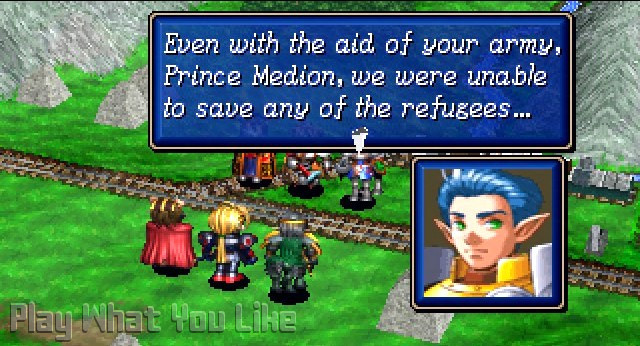 Too Big for a Bullet Point:  Congratulations, you made us stop caring.

How about if near the end of the game, the designers thought it would be good to divide your team and appoint their choice of leader? One picked for you regardless of level. And how about if this predetermined team leader could only lead whatever number troops you’ve recruited over twelve? Well, don’t wonder. They did it.

Having missed out on recruiting a couple characters we were stuck. We had only a couple little used, un-leveled units to fight alongside the assigned leader. That’s not enough for the mission. It stopped our progress. If not for an older save, it might have been game over right there. What a sad ending to a good game that would have been.

One way out (after reloading an old save) is to recruit lots of monsters with the newly acquired monster tamer. The game also helps by putting an optional challenge dungeon right before the two-team battle. Sparing you the details, this design decision takes control away from the player, with no great benefits, and tons of potential game-breakers.

Too Big for a Bullet Point:  Hard Luck Team

We didn’t enjoy the story of Scenario Two as much as Scenario One. Synbios, the leader from Scenario One, was a freedom fighter and the son of a noble man. He chose his battles. He forged a path on his own terms and saved many in the process.

Prince Medion, the leader in Scenario Two, is the son of a tyrannical, self-centered emperor. Medion spends the whole game in one of the following states:

At the end of Medion’s story, there’s no great turning of fortunes. No resolute standing up to his father and speaking out for justice. No going his own way, nor garnering respect beyond his army. He remains a poor toadie, unable to fight for what he really believes in. And unfortunately, the whole continent has to suffer for it—and we players too. It’s not a satisfying narrative, nor what we hoped for after Scenario One.

Some games forget the reasons we play. This installment lacks a triumph akin to Rebelstar Tactical Command, nor offers the satisfying poignancy of Kartia.

Scenario Two ends with a thud. Medion is forced to fight the army of likable Synbios, although at least not the man directly. The battle is too easy and less interesting than a number that came before. The larger war plot is unmoved. Very much the part II of a trilogy ending. We appreciate the big picture SF III in all its parts is trying to accomplish, but satisfaction must be given along the way or risk a downbeat play experience like Jeanne D’Arc. Certainly something a little more uplifting can be created for a key milestone—like the ending of a game.

Newer games are flashier, but not necessarily better, and none beat the scope attempted in these three interwoven titles. Scenario Two is less inspired in design than Scenario One. Still it’s an epic series worthy of respect—ambitious in a way rarely seen since. It aims high, but even its misses land above many an SRPG that have come after.

SF III is a series worth checking out for SRPG aficionados or even just fans of the genre. It’s not aimed at younger gamers like Drone Tactics, nor light and fluffy like Rhapsody: A Musical Adventure, and it definitely doesn’t delve into lapses of inanity like Disgaea. It’s a serious story, albeit a little too complex. But there’s no denying you’ll get an awesome sense of traveling, a fine requisite for any good RPG. 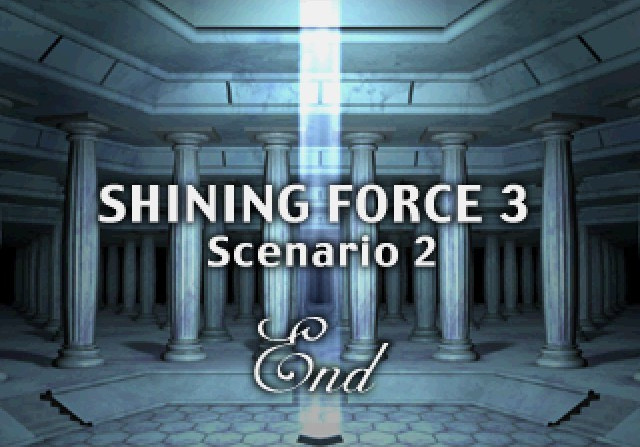 If you like the Shining Force III series, try: