We enjoy the Pokémon franchise mainly through the early seasons of the show, and the combat system design in general. We enjoyed the combat oriented games like Pokémon Stadium, but the regular games, with their grinding and never-ending random encounters, were not our speed. So when Pokémon got fitted for the SRPG genre, we were pleased. The execution is not perfect, but we’ll take a quality, fun crossover attempt like this any time over none. And fun it is. 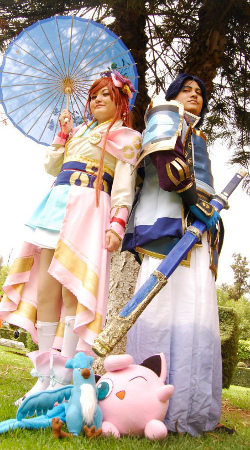 Without expectations regarding Nobunaga’s Ambition, the feudal Japanese setting is a pleasant change-up. The warlords of that franchise are unfamiliar and may distract initially. But they probably only add to those familiar with Nobunaga’s Ambition. Surely Pokémon Conquest encountered design challenges, likely amplified by the melding of two popular franchises, and heightened expectations. No one’s expectations are going to be fully realized in a compromising crossover title by its very nature.

The layout begins with a detailed and active world map. Cities host grid-based fighting areas of all sorts, realized in full 3D, and rotatable at set 45 degree increments. Generally speaking, you will pick a team of up to six Pokémon/trainer pairs to battle AI Warlords or another person in multiplayer. Pokémon cannot be used without their warlords, who each have their own strengths and affinities for various Pokémon types (like grass, flying, etc.). 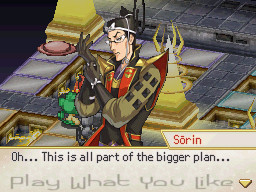 Too big for a bullet point:  Dynamic Environments (that only look a little boring…)

One of the best things to happen to SRPGs is dynamically changing battle environments. This feature is epitomized in the Shining Force III (1998) train yard battle with cars that move every turn. They force one to adjust tactics and movement as new paths open and close.

Conquest is not so overt with its dynamic changes, but they still significantly affect gameplay. Consider the following elements the game employs:

Environments also sport a few dynamic pieces. Trees can be destroyed to gain an item. On certain maps, otherwise nondescript grid squares actually house (really annoying) traps (not a good example to emulate). Boulders and logs can be pushed across a battlefield to damage opponents (this was surprisingly fun–and sometimes tragic). One map has teleporters. Perhaps the idea was good on paper, but we found it to be more of a nuisance.

All these elements (in combination with terrain types) keep the environments from being static.

The Good & The Bad Conveniently Together in One Point: 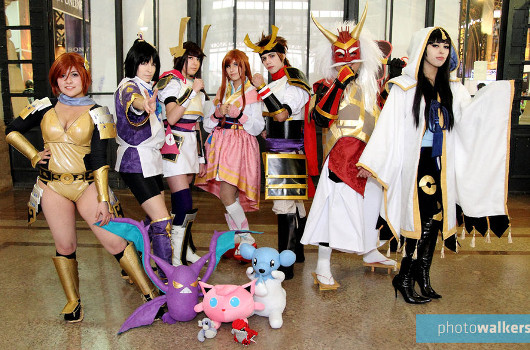 Perhaps a procedural solution can be a remedy to boring textures. Maybe a moving, translucent layer of shadow mimicking clouds on a sunny day. Consider palette swapping the same textures to change day to dusk to night. Other procedural tricks like a rain, wind, or footprints can also liven things up. 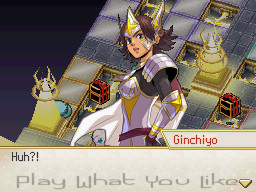 Too big for a bullet point:  Ash Ketchum Versus the World!

For those with long experience in SRPGs, head-to-head play versus another person is a rare thrill. Pokémon Conquest’s wireless matches were something to which we were looking forward. But balancing such a system is key, and something we game developers ponder. How do you reward game experience yet still have an even match-up with someone who has played less?

The matchmaking factor they come up with is “link percentage.” Some warlords can train, for example, an umbreon, all the way up to 100% of its potential, while others might only be able to take it up to 30%. Going into multiplayer, you can set a link percentage limit. Setting it to 60% brings down those higher. Those limited to a lower number still cannot rise to 60. The problems with this are manifold, especially if you only played the primary story and don’t have the right warlords for your favorite Pokémon. Some warlords can only be recruited in the post main-story quests (see entry “Two Halves…” under Bad).

But say you do have the optimal warlord for the pokémon you want (a large assumption in this game), “link percentage” is still more a “battle strength suggestion.” Lower evolution Pokémon can almost never stand up to higher evolutions, which makes surface sense, but the franchise does star Ash and his Pikachu (retconned to a middle evolution from a starting type). This pikachu defeats higher evolutions routinely. In Conquest, some lower evolutions have fun abilities lost once they evolve. It’s too bad they can never really be brought into serious competition against higher evolutions regardless of link percentage or experience.

Link percentage just did not equal fighting power in too many situations.

What this game needs for multiplayer–and it’s an idea that would serve the entire genre well–is a point system that takes into account actual fighting strength. A numerical value assigned to level, speed, toughness, hit percentage, damage dealt, number of attacks, grid squares hittable–whatever the developers can think of that really makes a difference in battle. The numbers can be weighted and crunched for an accurate, balancing multiplayer value. The sad part is this game actually does have a point system like this. You see it when attacking cities controlled by your opponents, and at the beginning of multiplayer matches–after your choices are set…

Too big for a bullet point:  What’s in a Name? (uh, that sounds similar to every other name…)

Games are localized for reason, and it’s more than just making the language understandable. Sometimes certain concepts or culturally specific things are modified to be more acceptable or understandable to the new region. Strong ethnic names can be difficult to decipher for those whose ears are not tuned to them. If it’s a single character in passing, it doesn’t really make a difference. But it does become an issue, if for gameplay reasons, one must constantly pour through a long list of similar sounding, almost identically spelled names.

Pokémon Conquest uses warlord names from the Nobunaga’s Ambition series, and there are scores of them. Each has their own strengths with various Pokémon. Selecting among them and knowing their stats is a critical part of the game. A part made many times more onerous because of the naming. Take this short sampling: Kagekatsu Kanetsugu Katsuyori Kazumasu Masahide Masakage Masatoshi Masatoyo Masasuna Morichika Motochika Morikiyo Motoharu Motonari Motozane… Believe us, it goes on and on like this.

And as if all that was not enough, there are a limited number of warlord portraits. That’s right, Morichika and Motochika may share the same portrait… Many warlords do. Yay! The monikers seem to be designed by a “traditional Japanese name generator.” Take the following name components and see how many different ways you can combine them:

Too big for a bullet point:  Two Halves Make a Broken Whole

Probably our single biggest criticism of this otherwise quality offering is the decision to break the entire game into two unconnected parts. The first part is the “normal” SRPG story arc. You have to conquer the map, and along the way recruit pokémon and warlords. The problem is that many Pokémon are unavailable in this mode, along with many warlords necessary to bring them to 100% link percentage. At some point while playing the first part this becomes evident. For some, it may be after many hours of careful team building.

So then you must determine whether to continue burning hours playing with your carefully constructed teams, or finish the initial part only to have all your work wiped out. That’s right, at the completion of the first part, after you beat Nob-face, all your pokémon and warlords are taken away and you pretty much have to start over. The second part is not like the first, either. It’s dozens of unrelated quests. Are they better than grinding? Yes. Do we want to play them after spending many hours building our teams and defeating Nob-face? No.

It boils down to not playing with the pokémon you want, nor having the warlords you need. If you play Pokémon games, you undoubtedly have favorites. Imagine our elation at recruiting an onix, one of our favorites. Imagine our disappointment at finding out he can only be taken up to 30% experience with the trainers at hand. Imagine looking forward to recruiting a blitzle, only to find it’s only available at some point in the second part quests.

They could have made one seriously awesome narrative with all the material scattered about in the second part if they combined it with the story arc of the first part. Instead we get an underwhelming story arc, and an underwhelming deluge of unrelated quests. We didn’t get to play with the Pokémon we wanted—despite their availability in the game, because we decided to stay with our initial investment of time, and not throw it away as the game tried to force upon us.

Let not that last entry color our entire opinion of this otherwise fine game. There’s much to it, very much, and it succeeds at most. As for expectations, though easily raised, they should be guarded if you plan to play. This isn’t Ash Ketchum’s Crazy SRPG Adventure. If that were the case we surmise they’d have tried to more closely follow traditional pokémon paradigms.

As with any Pokémon game, YOU have to decide how much research you’ll do. How much time you’re going to sink into the match-ups and/or the leveling. How far down the rabbit hole are you desirous of going? If you let it, Pokémon can become a second job (that doesn’t pay the bills…). If you want to play every possible quest in this game to its completion, it can last many, many hours. Not that all the quests offer fantastic, new gameplay avenues. They don’t. But if you have opportunity, try the head-to-head battle. That’s worth the effort.

Is Pokémon Conquest fully satisfying to Nob-face’s Ambition devotees? Few in America can answer that question, but we think it probably gives it an amusing spin. Is it satisfying to Pokémon fans? We think so, especially for those who have played more than one standard Pokémon game and are looking for a change up with more game and less repetition.

Is it satisfying to SRPG aficionados? Though it’s hard to separate out our appreciation for Pokémon, we think the SRPG aspects are strong enough to enjoy. Is it a super serious sword-and-magic political drama? No. (It’s got a positive ending!) Not every SRPG has to be as serious as Final Fantasy Tactics. Nor does one have to be clownish like Disgaea to be fun. 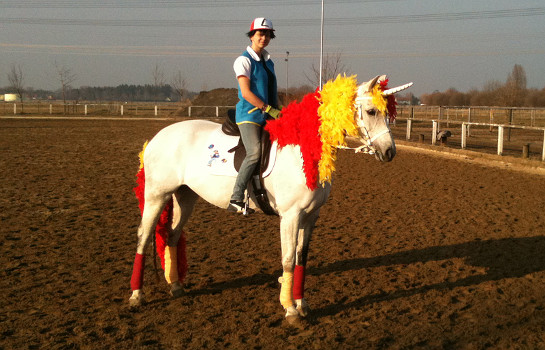