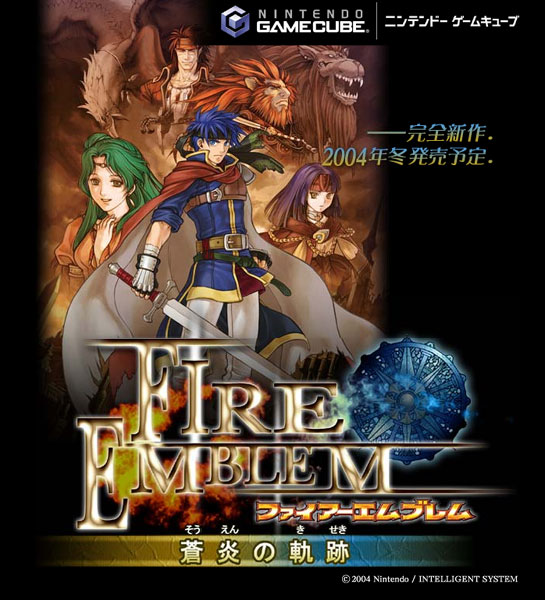 Intelligent Systems has a long history of making quality strategy games. They made the Advance Wars games, Fire Emblem, and Fire Emblem: Sacred Stones for GameBoy Advance. Path of Radiance marks this franchise’s first foray into the third dimension.

The transition from 2D to 3D can be challenging to developer and gameplay mechanics. Intelligent Systems weathered the technical storm, creating a 3D engine capable of taking them beyond the GameCube’s lifetime. As for the gameplay, it also weathered the transition well. It’s very much the classic Fire Emblem. Perhaps it’s too much of the original without giving sufficient attention to the third dimension.

The signature elements of Fire Emblem, as demonstrated by Path of Radiance, will be judged on their merit regardless of franchise history. To the developer’s credit, few will be dinged because of poor quality. The look and set up are very classic SRPG. Relatively flat but 3D terrain is looked down upon from above by a fairly adjustable camera and battles between units take you to a separate fight screen. 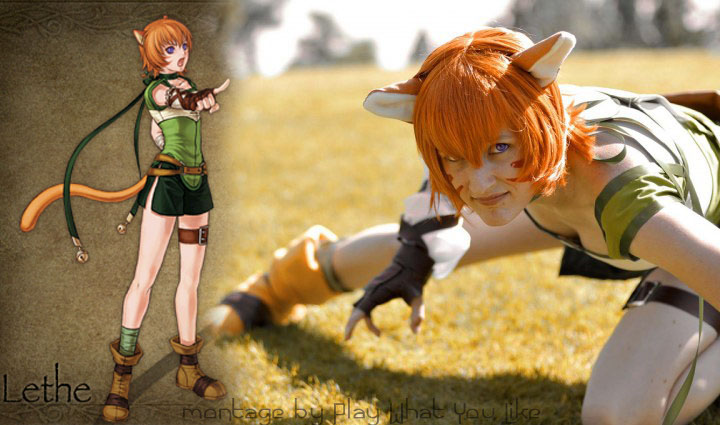 Too Big for a Bullet Point:  Death & Etc.

What does that mean? Usually we put the possibility of real character death in the “good” category. However this Fire Emblem puts too many variables onto the battlefield. The result leads to more restarts and dilution of character caring immersion. (And we don’t like to restart. We like to play it for real.)

Hit points are not high in this franchise. The loser of an engagement often dies in one encounter. Add to this the possibility of critical hits which can do double damage. Seen the other way, imagine one of your characters constantly getting critical hits against enemy attackers. As one falls there is now room to approach your character again for another attack. A chain of enemies can attack your character this way.

Or consider mounted enemies. They move up to a particular character and attack, and then retreat. In this way an entire chain of mounted enemies can attack a single character in one turn. And this doesn’t include mounted archers who can attack from range. The hit points and combat mechanics are just not robust enough for these kinds of chained attacks. It becomes frustrating.

Fire Emblem death is irrevocable. There are no temples or clerical spells for resurrecting. There are no objects like Phoenix Downs to place upon fallen units within three rounds (our favorite method). In such a mechanics environment the developers should be looking for ways to minimize unpredictable damage. Additionally it seemed the AI sometimes encouraged it. Ugh. 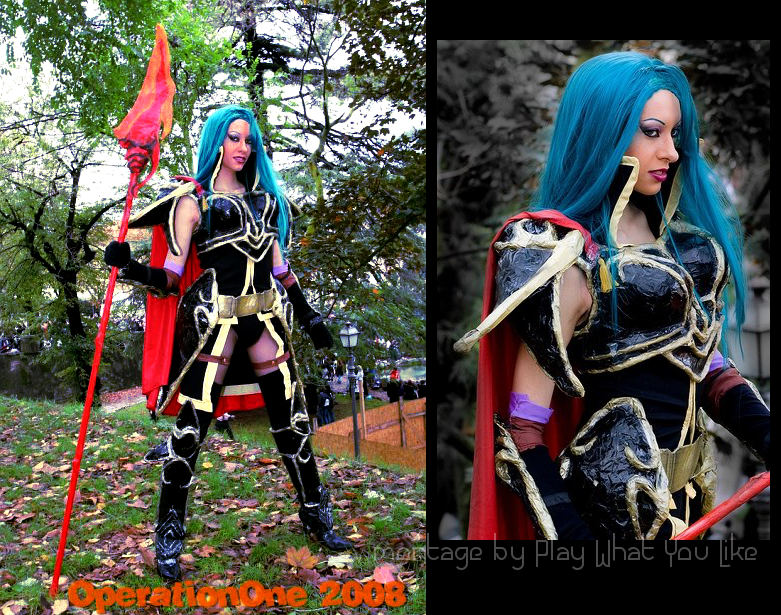 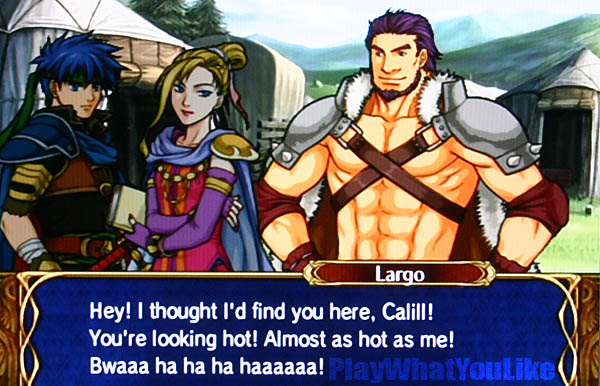 Too Big for a Bullet Point:  Are you the new guy?

Some encountered characters can join your party, however the process can be onerous. Which specific character needs to talk to them? And during a battle? Unless you like restarting, such risky moves are too dangerous. The possible recruit might still be attacking your units until the right person talks with him.

Random characters associated with the battle might pop up with some lines. Apparently there’s supposed to be additional interaction with our potential recruit. But what to do is unclear. Resorting to a FAQ to get these characters is a design fail.

Too Big for a Bullet Point:  The “real” bad guy & comeuppance.

So the big bad guy’s henchman with the uninspired name “The Black Knight” is likely the villain you really want to beat. The game gives you a good reason, and plenty of lead-up encounters with him including a fight in which you lose.

Before the final battle you get a chance to face him again. Your lieutenant tells you to leave the fight if you don’t think you can win. She says something like this more than once, clearly giving the indication that if you aren’t strong enough yet to beat The Black Knight, withdraw to fight him another day. And that’s the big problem, because another day never comes.

Apparently you need some luck in order to win this encounter, and you need another character to be leveled up sufficiently to help you. It’s a lot of chance that has to go your way. If you don’t beat him the nebulous result is rather unsatisfying in the comeuppance department. In fact we were still expecting The Black Knight to appear again in the final battle.

This element was the most poorly handled in the game.

Too Big for a Bullet Point:  End already.

The pace for the game slows in the last third. The writing becomes fat, and when you win the final battle the game doesn’t know when to leave. It forces upon you a long textual epilogue. Why did they disable the usual button press that accelerates the text printing?

You are forced to watch text crawl out word by word as if translated from Morse code. It literally takes many boring minutes. And sadly the epilogue was… well, stupid. That’s right we said it. Stupid. 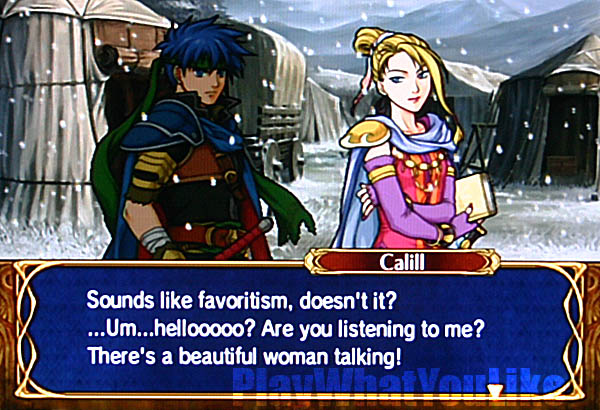 It goes on into some self-important blabber about “you having planted the seeds of future war, blah blah blah.” Just the thing you want to hear after all that fighting you did to bring peace to the continent. It goes on with some ruminations about whether the big baddie was right after all. Huh? Are you trying to make this the worst ending possible?

On the bright side they did give you stats for all your characters. If you cared about them as we did about some, the stats at least, are welcome.

We included a lot in the “bad” category because we care about this quality franchise, and we hold it to a higher standard. Certainly it’s hard to make a large game like this and not stumble at some point. Yes, they blindsided us with a beast character who is able to attack with magic even when not transformed.

Yes, we got saddled with a sad sack knight. We tried to make him into a warrior, but he just wasn’t good at. He finally fell in battle for the last time and we didn’t have the will to bring him back with a restart. Sorry Brom. Next time stick to baking.

While we don’t care for reliance on FAQ’s, if you’re going to play this game, consult one to find out how best to beat The Black Knight. That’s a tip from us for which you will be grateful.

Don’t let the length of the bad category deter you from playing this quality title. It’s worth trying out, especially if you think the GameBoy Advance versions are fun. Of course it’s very difficult to match the quality and story of the first Fire Emblem. Few SRPG’s can.

If you like Fire Emblem: Path of Radiance, try: